Despite protests, presidential candidate Donald Trump spoke at a fundraiser for the Suffolk County Republican party in Patchogue.

The event ignited controversy because it was held just a few blocks away from the hate killing of an Ecuadorian immigrant, Marcelo Lucero, who was killed byseven teenagers who made sport of targeting Latinos. The fundraiser attracted some 600 demonstrators, both for and against Trump.

Down the block from the GOP fundraiser, community members came together to hold a vigil for Lucero.

Local officials and Latino advocates wanted the event moved because of what they call Trump’s xenophobic rhetoric. But during his speech, Trump avoided his more controversial language.

Some of Trump’s supporters, like Eric Peterson, believe that Lucero’s murder eight years ago is unrelated to the decision to have Trump’s fundraiser at the Emporium.

“I believe that as a free country we’re able to have the debate and campaigns wherever we want,” Peterson said.

“What's more important to you, the wall or the trade deal,” Trump said. “We'll talk about trade."

Trump jabbed at local politicians for allowing the manufacturing jobs to leave the Island in the first place.

“I can’t believe you guys would allow that to happen,” Trump said. “What the hell? Are you getting soft? They’re getting soft on me. I don’t believe this.”

John Jay LaValle, the Suffolk County Republican chairman, who invited Trump to the event, said that Trump’s a New Yorker who speaks straight.

Hundreds of people came to Patchogue to protest trump and to show support for him. In his speech, Trump left out some of his more controversial statements on immigration.

Pontieri says the village worked with Suffolk County Police and the Secret Service to ensure violence did not break out. There were no arrests last night.

Charles Lane
Charles is senior reporter focusing on special projects. He has won numerous awards including three SPJ Public Service Awards, a National Murrow, and he was a finalist for the Livingston Award for Young Journalists.
See stories by Charles Lane
Jessica Opatich 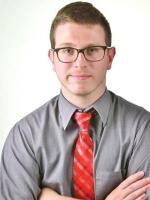