The Complications of Comedy

Dying is easy, comedy is hard. But, why is comedy so hard, especially on the stage, and what makes something funny?

The premise for a famously funny plot could easily sound like a tragedy.  An out of work actor is so desperate for employment that he dresses up like a woman and then falls in love with a beautiful co-star whom he deceives and betrays on several levels. That doesn't sound that hilarious.

And, speaking of dressing up as a woman, the guys in "Some Like It Hot" have witnessed the Valentine's Day Massacre and now thing they're going to be murdered by the mob.  Hilarious right, but it is.

How about the one where the people don't understand they're dealing with a dangerous leopard escaped from the zoo.

So, what makes something funny?

It's our different set of sensibilities writers and actors bring to that same material. We'll talk to some very adept practitioners about that.

Dying is easy, comedy is hard. But, why is comedy so hard, especially on the stage.

Leave your comments below, email us at colin@wnpr.org, or tweet us @wnprcolin. 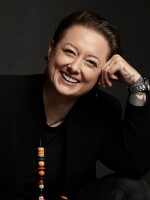 Betsy Kaplan
Betsy started as an intern at WNPR in 2011 after earning a Master's Degree in American and Museum Studies from Trinity College. Prior to that, Betsy worked as an intensive care registered nurse in several Connecticut hospitals.
See stories by Betsy Kaplan
TOP HEADLINES