WNPR Health Forum
Cancer Answers is hosted by Dr. Anees Chagpar, Associate Professor of Surgical Oncology and Director of The Breast Center at Smilow Cancer Hospital at Yale-New Haven Hospital, and Dr. Francine Foss, Professor of Medical Oncology. The show features a guest cancer specialist who will share the most recent advances in cancer therapy and respond to listeners questions. Myths, facts and advances in cancer diagnosis and treatment are discussed, with a different focus eachweek. Nationally acclaimed specialists in various types of cancer research, diagnosis, and treatment discuss common misconceptions about the disease and respond to questions from the community.Listeners can submit questions to be answered on the program at canceranswers@yale.edu or by leaving a message at (888) 234-4YCC. As a resource, archived programs from 2006 through the present are available in both audio and written versions on the Yale Cancer Center website.

Something Wild: What's Going On with Bats and White Nose Syndrome?

Bats in New Hampshire have been struggling with White Nose Syndrome for the past few years. So we sat down with Wildlife Biologist Emily Preston from NH Fish and Game and Endangered Species Biologist Susi vonOettengenfrom U.S. Fish and Wildlife Service to find out how they’ve been faring recently.

Obviously, bats are really important in our eco-system because they are the greatest predator of nighttime insects. As von Oettengen explained, NH hosts eight species of bats (among them: Little brown bat, Long-eared bat, Tri-colored bat, Small-footed bat, Big-brown bat), so that adds up to a lot of insects consumed.

Bats start migrating at different times throughout the fall. In most cases, the females migrate shortly after mating, while the males stick around a little longer. But migration patterns also vary among and within species. Some are long-distance migrants which will fly as far south as the southern U.S., and some species are short-distance migrants, preferring to spend the cold months inside caves ("hibernacula") in New Hampshire, New York, Vermont, etc.

The Big-brown bat and Little-brown bat are the two most familiar bats in the state. These are the ones you’ll see skittering through your back yard on a summer night, or roosting in your eaves, attic or barn. Preston said that U.S. Fish and Wildlife Services has documented a 90-percent decline in Little-brown bat populations.

Preston explained thatWNSis a fungus that originated in Europe and somehow it found its way here. Once here, because it’s an exotic species and no there’s existing entity to keep it in check, it took off.

European bats seem to be living with WNS. It could be that they went through a similar situation hundreds of years ago, though there is no documentation of this. So it’s possible to extrapolate that North American bat populations will come through this. So the bats that survive WNS will become the seed population for what will become the bats of New England in the future. A population bottleneck like this is not uncommon, it’s part of the adaptive process that fuels evolution.

But what traits do the bats surviving WNS have that allowed them to survive? Short answer is: Nobody Knows. Von Oettengen referenced some data from Pennsylvania: a group of biologists had tagged some bats before WNS struck and have been checking up on them over the course of the crisis. The surviving bats seem to be consuming more insects before retiring to the hibernacula and so have larger stores of fat. So that’s one theory.

There has been much discussion over the years about how we (humans) can help our besieged mammalian cousins. Since WNS is a fungus, couldn’t we treat the caves with some sort of antifungal, but a blanket response could end up doing more harm than good by killing off other bacteria/fungus that are part of the complex cave ecosystem. Inoculating the bats has also been considered, but catching individual bats is a difficult and time consuming process. Their sonar is incredibly sensitive and they can easily avoid nets or fly around a cloud of “medicine mist”.

There are small things we can do to help. If you’re comfortable living with bats in your attic, eaves or barn, leave them be. Or you could put up a bat house. Preston put one up in her yard in a hot, sunny place and had nineteen bats living there by the end of the summer.

But perhaps we don’t need to “do” anything. Nature often seeks equilibrium, as with the European bats which seem to be living with the fungus. The few New Hampshire bats that are surviving this epidemic are passing whatever adaptation that has helped them to survive on their pups. So, potentially, we could look back on this situation from some future date and we’ll have healthy bat populations. Von Oettengen said it could take hundreds of years for such a rebound. Hundreds of years? She explained that bats, like other long-lived mammals, don’t produce many offspring, usually just one or two pups per year. Considering normal mortality rates, it will take a good long while for bats to again reach theirpre-WNSpopulation.

Chris Martin
Chris Martin has worked with New Hampshire Audubon for more than 19 years as a Senior Biologist in the organization's Conservation Department. His work has focused primarily on monitoring and management of New Hampshire's endangered or threatened birds, especially birds of prey such as bald eagles, ospreys, and peregrine falcons. A wildlife biologist with almost 30 years of diverse experience, Martin has climbed to bald eagle nests in Alaska's Katmai National Park, counted seabirds near the Aleutian Islands, coordinated peregrine falcon restoration at Isle Royale in Lake Superior, helped research a wildlife habitat field guide in Minnesota, and studied how a southern Indiana forest responded after a devastating tornado. Since moving to New Hampshire in 1990, Martin has worked frequently with colleagues at the New Hampshire Fish and Game Department, the U.S. Fish and Wildlife Service, the U.S. Forest Service, and other agencies to recruit, train, and deploy volunteer wildlife observers when and where they are needed. He has advised electric utiliies on how to establish safe nesting sites for ospreys, partnered with rock climbers to collect peregrine falcon egg samples to check for environmental contaminants, and documented New Hampshire's only known breeding population of American pipits in the alpine zone on Mt. Washington. In 2006, Martin received an Environmental Merit Award from the U.S. Environmental Protection Agency in Boston for his outstanding efforts in preserving New England's environment. “I view my role as one of documenting what's going on with wildlife populations in the Granite State, and also providing folks with the knowledge and training they need to make meaningful wildlife observations out there on their own. That's one of the reasons I find contributing to Something Wild to be so enjoyable.”
See stories by Chris Martin

Dave Anderson
Dave Anderson is the Director of Education and Volunteer Services for the Society for the Protection of New Hampshire Forests, where he has worked for more than 19 years. He is responsible for the design and delivery of conservation education programs including field trips, tours and presentations to Forest Society members, conservation partners and the general public.
See stories by Dave Anderson 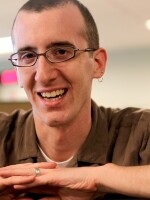 Andrew Parrella
Andrew Parrella came to NHPR in 2007 and is our main producer of all on-air promotions and station imaging spots. He also produces our weekly features Giving Matters and Something Wild and works on special projects like StoryCorps. Most recently, Andrew has been spearheading the push to digitize NHPR's audio archive, and has been polishing and posting gems on the newly created From The Archives blog. Parrella worked at WGBH Radio in Boston, filing stories for the Marketplace Health Desk and working on a number of news and documentary pilot projects. Before his radio career, Andrew spent the better part of a decade as a technician at theatres around New England from Burlington, Vermont to Matunuck, Rhode Island.
See stories by Andrew Parrella
TOP HEADLINES