"It's really cool. It's probably one of the highlights of my life here."<br><em>Roger Hambidge</em>

The Mystic River saw history this weekend as the world's last wooden whaling vessel, the Charles W. Morgan, made its way from its longtime home at Mystic Seaport to New London, where its restoration will be completed.

Horns, whistles, and cannon fire could be heard for miles, and small boats packed the river, all in celebration of one very big, and very old vessel, the Charles W. Morgan. The ship hadn't journeyed back down the river since it was towed up in 1941.

Mystic's Jules Johnson, the cook and steward for the Morgan's upcoming voyage, took it all in from on deck. "I just was looking back and seeing all the ships following us," she said. "There's the Sabino, and there's the Argia, and the Vigilant. It's just so exciting to be on this boat, you know? Just amazing."

With two tugs doing the grunt work for the Morgan, the trip overall was pretty smooth.

If you were one of the hundreds of folks packed onto piers, or leaning out of windows on the river's west bank, you might've seen a man named Roger Hambidge, fitting this description: "Age 62, 5'7" soaking wet, brown hair, blue eyes, white beard," Hambidge said. "Probably need a hair cut."

Hambidge would have been easy to spot, as he was waving enthusiastically from the Morgan's starboard side much of the way. He started working on the museum ship as an apprentice in 1971, and took it through two major restorations over a 30-year career at Mystic Seaport.

When Hambidge heard in 2008 that the ship was going to be rebuilt again, this time with the intention to take it to sea,  he said, "I was like, 'Yes! Yes! Oh my god, it's great!'" He returned to the Seaport's shipyard to take part in the project. At its peak, it employed nearly 50 workers, and benefited from the efforts of as many volunteers.

It has taken over five years, but now, Hambidge said from the deck of the Morgan, "Here we are. As I'm speaking, we're heading down river, and you can probably hear the cheers of the crowd. It's really something to see. It's really cool. It's probably one of the highlights of my life here."

With two tugs doing the grunt work for the Morgan, the trip overall was pretty smooth.

The first challenge, making a slight turn immediately after the Mystic River highway bridge, was met with ease, with the ship's bowsprit passing over Mystic River Park in the process.

The second, negotiating the shallows at the mouth of the river, was a bit more challenging. Mystic Seaport's shipyard director, Quentin Snediker, could be seen forcefully waving corrections to the tug crews, moments before the Morgan kissed the sandy bottom. She was quickly pulled free.

Four hours after departure, the Morgan reached her destination at City Pier in New London. "I'm sorry the trip is over!" Hambidge said. "We never saw a whale, so financially the trip was a bust, but the ship got some movement. I was glad I was able to witness it and feel it under my feet. I know I'll never forget this day."

Among the people I spoke with aboard, he won't be alone. The Morgan will be in New London for further restoration work into June, when she'll set sail to visit other whaling ports in New England. 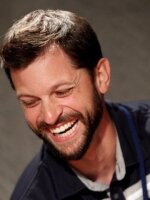