The world’s oldest active endurance racing event is the 24 Hours of Le Mans. But 24 Hours of Lemons might be the world’s strangest endurance racing event. Both challenge drivers to complete as many laps as possible within a set amount of time with the victory going to whoever completes the most. The main difference? At Lemons, “Vehicles must be acquired and prepared for a maximum of $500.”

The legend of Lemons begins with company owner Jay Lamm, then an auto journalist, looking around at a high-end car rally and saying to himself, “What if we did this, but all the cars were terrible? Wouldn’t that be more fun?” So a race involving $500 cars was held. And much to his surprise, he discovered that the cars … held up just fine.

The next natural step was to make the race harder on the cars. Thus, an endurance race based on Le Mans was born. That first 24-hour rally went great — it was everything Lamm could have hoped for. But then he got an unexpected question. “When’s the next one?” Fifteen years and over 200 races later, 24 Hours of Lemons is still going strong, and what keeps it going is an enthusiastic base of competitors who just keep showing up.

Race results were as varied as the cars. Class A winners Team 444, the Bostonwhiners, completed 517 laps. At the other end of the spectrum Team 74, Super Soft Raceday, completed four. Arguably the highest award at a Lemons race is the Index of Effluency. The IOE is decided with a highly complex formula (how well your car did/how awful your car is). This race’s IOE went to Team 77 and their 1978 Chrysler Cordoba. They completed a respectable 314 laps.

If the 24 Hours of Lemons experience interests you, you are not alone. There are 20 Lemons races across the country scheduled for the next year, and judge Eric Rood says, “That’s a little light.” Cheap cars, goofy themes, and a low barrier to entry make these races events for everyone who wants in. “It’s a chance to race your dream car,” said Rood, “even if it’s not how you might expect.” 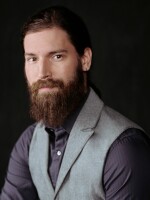 Tyler Russell
Tyler Russell is a Visuals Journalist, splitting his time between daily news photography and video content for digital and TV. He joined Connecticut Public in 2013 as an instructor in the Education Department and moved onto the Visuals Team when it was formed in 2019.
See stories by Tyler Russell
TOP HEADLINES