House Speaker Joe Aresimowicz, a Democrat from Berlin, says an increase in the Connecticut sales tax from 6.35 percent to 6.85 percent is needed in order to balance the state’s two-year-budget. That budget is already seven weeks late.

“The majority of our tax increases allow us to keep the towns as harmless as we can.”

Aresimowicz says the new revenue would help restore cuts to state funding to cities and towns ordered by Governor Dannel Malloy to take effect by the end of September, if there’s still no budget. State Senate Democratic President Martin Looney of New Haven says most members of his caucus support the move.

“The governor’s proposal was I think calculated to heighten the pressure. Because he laid out what the painful consequences to many towns would be if there is not a budget reached by mid-September. So if there are any folks whose minds weren’t sufficiently focused, they certainly are now.”

“I will not compromise what I believe will change the state of Connecticut for the better just so that I can say we have come to a bipartisan solution.”

Klarides says her caucus will meet on Thursday and come up with their budget. Governor Malloy is glad lawmakers seem to finally be working to get a budget agreement.

“I’m encouraged that there appears to be an urgency developing about this, albeit 53-54 days into the process. And I think that’s appropriate. We need to get a budget. I want a budget. I don’t want to do what I’m doing by executive authority. That’s not preferable.”

Democratic legislative leaders say they’re hoping they’ll have a budget agreement ready for a vote before the second week of September. 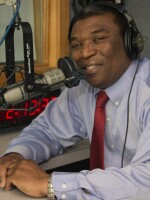 Ebong Udoma
As WSHU Public Radio’s award-winning senior political reporter, Ebong Udoma draws on his extensive tenure to delve deep into state politics during a major election year. In addition to providing long-form reports and features for WSHU, he regularly contributes spot news to NPR, and has worked at the NPR National News Desk as part of NPR’s diversity initiative.
See stories by Ebong Udoma
Newsletters
Sign Up
Related Content