ARPA spending in Connecticut: How is money being used?

The American Rescue Plan Act was signed on March 11, 2021. Less than two weeks later, $81 billion was released to states across the country.

This hour on Where We Live, we hear from experts on the state of ARPA spending in Connecticut. How is money being used to support housing, education and infrastructure?
Municipalities must allocate funds by December 2024 and fully spend them by December 2026.

Where We Live is available as a podcast on Apple Podcasts, Spotify, Google Podcasts, Stitcher, or wherever you get your podcasts. Subscribe and never miss an episode.

Where We Live
Stay Connected 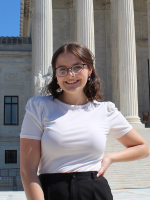 Anya Grondalski
Anya Grondalski is a freelance producer. She started at Connecticut Public as a radio production intern and currently assists in producing shows for Where We Live. Anya has double majors in journalism and political science at Quinnipiac University. She will be pursuing public relations for her graduate year.
See stories by Anya Grondalski