Dallas welcomes refugees from Afghanistan with an authentic Afghan meal

After months of waiting at military bases, more than 50,000 Afghan evacuees have been resettled in communities across the United States. NPR's Michelle Aslam reports on how Dallas is welcoming some with a familiar meal.

MICHELLE ASLAM, BYLINE: In Afghanistan, Roshan Mashal, the deputy director of the Afghan Women's Network, felt obligated to stay there and help as long as she could after the U.S. withdrew in April. But things got too dangerous. She had to leave.

ROSHAN MASHAL: Eighteenth of August, I evacuated from Afghanistan.

ASLAM: Mashal spent two months at Fort McCoy in Wisconsin and is now in Dallas. Adjusting to a new place is hard, especially because she had to leave her 21-year-old son behind at the military base for now.

MASHAL: I am also under many pressure and many stress because of him. So I hope he become very soon here because I think I can't suffer more.

ASLAM: But today, she's sitting down to an authentic Afghan meal.

UNIDENTIFIED PERSON: Thank you all so very much for being here together with us.

ASLAM: Catholic Charities, which has resettled more than 200 new arrivals in Dallas, got them together to meet one another and celebrate.

UNIDENTIFIED PERSON: We would like to welcome you all to not only America, but Dallas.

ASLAM: The food was prepared by Break Bread, Break Borders, an organization that trains and mentors refugee women to work in the food industry. It's also a catering business, offering dishes women contribute with recipes from Syria, Chechnya and Afghanistan.

ASLAM: Jin-Ya Huang founded Break Bread, Break Borders in 2017, after she lost her mother, who herself was in the restaurant business.

JIN-YA HUANG: We speak food really well (laughter), so that's how we know how to say welcome in all the different languages, is preparing these authentically, culturally appropriate meals.

ASLAM: Huang's mother used to talk about food as a social equalizer.

HUANG: My ancestors are refugees who escaped from China, from communism, to take refuge in Taiwan. And my mom, as a chef in our kitchen, used to be really mindful about training other refugees, immigrants and migrants to come and work in our kitchen.

ASLAM: Today, Jamileh Jafari and her sister Sharifeh prepared the meal - Kabuli Palao and Chicken Korma. They left Afghanistan more than a decade ago.

JAMILEH JAFARI: Lot of people last - the past two, three event. All the people Afghanian people. We make the food for them, yeah. We say welcome. We talking with them. Yeah.

ASLAM: Jafari says it means a lot to these families to eat a familiar meal after everything they've been through. But it also means a lot just to have someone to talk to who understands what they're going through.

ASLAM: New arrival Roshan Mashal says she does feel lucky. Still, it's hard to move on when you've left so much behind.

MASHAL: I cannot be comfortable. Even I am here - at least my life and my children life is safe. But I don't know how I can accept that I am comfort, but my people is not.

ASLAM: Jin-Ya Huang with Break Bread, Break Borders says while it might not seem like much, a meal can mean a lot to someone.

HUANG: You know, we want people to know that, you know, when you lead with love, the rest will come. 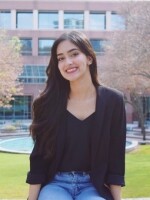 Michelle Aslam
Michelle Aslam is a 2021-2022 Kroc Fellow and recent graduate from North Texas. While in college, she won state-wide student journalism awards for her investigation into campus sexual assault proceedings and her reporting on racial justice demonstrations. Aslam previously interned for the North Texas NPR Member station KERA, and also had the opportunity to write for the Dallas Morning News and the Texas Observer.
TOP HEADLINES