Connecticut residents and delegation responds to Russian invasion in Ukraine

Myron Melnyk, who live in New Haven, says he spoke to his cousin in Ukraine this morning. Melnyk said his cousin lives in a rural area in the West of the country, so he’s not too concerned for him right now, but the future does not feel so hopeful.

Melnyk said he and his cousin believe Russian President Vladimir Putin intends to take control of Ukraine. “His feeling is the same as mine, Putin will not stop until he topples this government, until he puts in his own puppet government,” Melnyk said. “That one person should look to overcome the will of a nation that voted overwhelmingly for independence.”

Blumenthal told reporters Thursday afternoon that he hopes Americans — and Connecticut residents — will help those fleeing Ukraine. “I hope that the American people will be forthcoming with aid and there may be asylum seekers who seek to come here, but we also need to budget additional resources for that crisis to aid countries abroad where refugees seek to go,” Blumenthal said at a press conference Thursday.

Blumenthal called for further sanctions against Russia and expressed U.S. support for those living in the Ukraine. "Costs & consequences must be swift, severe, & strong meeting Putin’s attack on the post-WWII world order. It is far past time to fully sanction Russia, Putin, & his oligarchs." Blumenthal tweeted Thursday morning.

My thoughts are with the people of Ukraine as Putin launches this premeditated, unprovoked attack. The USA stands with the Ukrainian people as they fight for their freedom from Russian tyranny.

Murphy echoed Blumenthal's criticism of Putin and called for America to support Ukrainians.

"Putin’s decision to invade is an evil, panicked move of weakness and will be his defining mistake. The Ukrainian people will fight for as long as it takes to secure their nation from this foreign tyrant, and the United States will stand with them," Murphy said in a tweet late Wednesday.

1/ Putin’s decision to invade is an evil, panicked move of weakness and will be his defining mistake. The Ukrainian people will fight for as long as it takes to secure their nation from this foreign tyrant, and the United States will stand with them in this fight.

Murphy, who’s on the Foreign Relations Committee, said he’ll do all he can to make sure America stands by Ukraine.

Connecticut's delegation in the U.S. House had a similar reaction.

In a statement U.S. Rep. Jim Himes says by invading Ukraine, Vladimir Putin has chosen to ignore warnings by the U.S., NATO and other nations. Himes says the decision will bring terrible consequences in the form of sanctions. And Himes warns that if Putin does not withdraw all troops, he risks an escalation in consequences that will not end well for him or his regime.

Praying for the people of Ukraine tonight. The world must now show that Putin’s evil will never be accepted. The Russian people must now realize who governs in their name. And Americans must now look hard at who was on the wrong side of all this.

U.S. Rep John Larson also released a statement in support of Ukraine and its people. "The invasion of Ukraine by Russia is unwarranted and dangerous. NATO, the US, the EU, and our allies and partners are united in confronting Russian aggression, and together, we have imposed severe sanctions on Russia," Larson said in a statement Thursday. "There will be a profound human cost to their actions, both to troops on both sides of this conflict and to the innocent civilians caught in the crossfire. This is a humanitarian and refugee crisis."

This is a developing story and this post will be updated.

Ali Oshinskie
Ali Oshinskie is a corps member with Report for America, a national service program that places journalists into local newsrooms. She loves hearing what you thought of her stories or story ideas you have so please email her at aoshinskie@ctpublic.org.
See stories by Ali Oshinskie

Jennifer Ahrens
Jennifer Ahrens is a producer for Morning Edition. After spending 20+ years producing TV shows for CNN and ESPN, she decided to tackle a new medium because she values Public Broadcasting's mission. She wants to educate and entertain an audience and Connecticut Public lets her do that.
See stories by Jennifer Ahrens 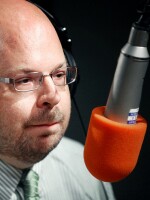