Researchers suspect humans gave COVID to deer. And it once spilled back into a person

DANIEL: Andrew Marks is a Ph.D. student at University of Pennsylvania's Perelman School of Medicine. He suspects the deer originally got COVID from humans but doesn't know how exactly.

MARKS: Everything is basically speculation at the moment.

DANIEL: But the question Marks had was, what did these viruses look like? And how had they evolved? Marks is lead author on a study still out for review that found that some of these samples had variants resembling the ones circulating in people at the time. But others - and this is twist No. 1 - resembled alpha, the first variant of concern, months after it was no longer dominant in people.

MARKS: Which is strange.

DANIEL: And problematic because after alpha had fallen by the wayside in people, it lingered in deer, meaning we can't quite forget about variants no longer affecting us.

MARKS: They're still present in the environment around us.

DANIEL: And then Marks and his collaborators noticed something else. Some of the viral samples had picked up a few dozen mutations. He likens it to subbing out a handful of individuals in a 30,000-person parade.

DANIEL: So that's twist No. 2 - the sheer quantity of mutations. And the more mutations, the greater the possibility of a more transmissible or virulent variant. Another study, also pending review, considered nearly 300 deer across southwestern and eastern Ontario in Canada. Some 6% had a COVID strain that was really retro.

SAMIRA MUBAREKA: This one is from an even older lineage. So it probably spilled over into deer at some point in 2020, maybe early 2021.

DANIEL: Samira Mubareka is a virologist at the Sunnybrook Research Institute and the University of Toronto. She says that spillover predates any of the variants of concern - delta, omicron, even alpha, which means it was moving around in the deer for a relatively long time.

MUBAREKA: So the number of mutations that have accumulated are fairly substantial.

DANIEL: But this constellation of mutations didn't stay confined to the deer. And here's twist No. 3. It turned up in a person.

DANIEL: Now, the vaccines seem to hold their own against this particular lineage of the virus. But here's the concern - that after finding its way into a different species, a different reservoir where it gathers additional mutations, a new variant or strain of COVID can slosh back into people and create more trouble. Barbara Han wasn't involved with the deer research. She's a disease ecologist at the Cary Institute of Ecosystem Studies, and she worries that once we see a spillover, we're in it for the long haul.

BARBARA HAN: I can't think of a single zoonotic disease that has established in an animal reservoir in the wild that we have been successful at eradicating. So the fact that we now have a semipermanent reservoir species - and not just in white-tailed deer but in mink and in deer mice and in all these other species around the world - suggests to me that we now have to keep track of how it's evolving in these species and constantly update our calculations of what the risk is for humans. 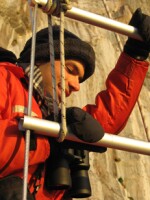 Ari Daniel
Ari Daniel has always been enchanted by the natural world. As a kid, he packed his green Wildlife Treasury box full of species cards. As a graduate student, Ari trained gray seal pups (Halichoerus grypus) and helped tag wild Norwegian killer whales (Orcinus orca). These days, Ari is a science reporter, and he records a species he’s better equipped to understand – Homo sapiens. He uses radio and multimedia to tell stories about science and the environment on public radio and online. In the fifth grade, Ari won the “Most Contagious Smile” award. Check in with Ari at his website.
TOP HEADLINES