Like many school districts across the country, Providence, Rhode Island Public Schools have a rapidly growing population of English language learners and programs to help them learn their new language. The problem is the state doesn’t have enough teachers certified to teach these students.

Silvana Laramee has been teaching for nearly 25 years. The students in her fourth grade bilingual class at Alfred Lima Elementary School in Providence are transitioning from learning only in Spanish to learning only in English.

On the day I visited Laramee's classroom, she walked her students through advanced steps in a math problem, stopping to gauge their understanding along the way.

“Can you explain what that means, Moises, that they gave it to us all together?” Laramee asked.

“First they give it to us in pieces,” Moises responded. “Then in this problem, they give it all together, like in a unit. We need to round and -- and we need to...” Moises then paused.

“You can say it in Spanish and I’ll help you in English,” Laramee said to Moises, who was on fire, answering multiple questions in a row.

“Kiss your brain!” she said to him.

With a blush on his face, Moises kissed his fingers and tapped his head. He’s one of a growing number of English language learners in the Providence school district. Two-thirds of the district’s students are Latino. Within the past five years, the ELL population doubled to about 24 percent.

“This is actually our beginning group in English,” Laramee said. “So we have two children in that group that are just new arrivals to the country, and two that actually arrived last year in the middle of the year. So she’s working on vocabulary development. If you’ll notice, there’s lots of picture supports.”

This is the first year that the governor and the General Assembly included a small pot of money in the state budget to support English language learning services and hire more teachers.

Providence Public Schools and several other school districts that have large ELL student populations have partnered up the Rhode Island Foundation, Rhode Island College, and the University of Rhode Island to subsidize an ELL-teacher certification program that includes courses online.

“But to be honest, it’s a drop in the bucket compared to the need, because we have a need for hundreds, if not more, ELL teachers today,” said Christopher Maher, the Providence school district superintendent. “And we just don’t have that in the pipeline anywhere.”

That’s because becoming a certified-ELL teacher takes time and money – two things that are difficult to come by as a full-time working teacher. They do get compensated by the district for the training, but the salary bump is only about $7 a week, before taxes.

Meanwhile, Maher points out the state next door, Massachusetts, is mandating this training for any teacher who may have ELL students in the classroom. Maher said it’s easy to compare Rhode Island to its neighbor, which has one of the best education programs in the country.

“And I worry that they’re once again going to get far ahead of us on educating this growing population of English language learners and we are going to be stuck behind,” Maher said. “And the places that are getting hit the hardest are clearly the urban areas.”

Most of Providence’s ELL student population is Latino, but in the last few years, the district has welcomed more than 200 refugee students from all over the world -- students who speak languages that range from Arabic to Swahili. Maher said that diversity just makes his school district better.

In Silvana Laramee’s fourth grade classroom, many students with parents who don’t speak English very well rely on older siblings for homework help, but Laramee also encourages her students to reach out to her from home.

“Sometimes when we are stuck in the homework, we use an app and it sends right a message to her,” said her student, Cindy, whose parents are from Guatemala. “We could send her a picture of our homework and she gives us some clues and stuff like that for she could help us with our homework.”

Laramee underscored that school districts with rapidly changing demographics need to hire more bilingual ELL teachers. But the need is bigger than that, she said. More classrooms need teachers who are certified to teach English language learners.

“You know, even having regular education teachers understand the ELL needs because there are ELL children sitting in regular classrooms,” Laramee said. “They’re in all classrooms.”

It's a big challenge. Laramee calls it the "hardest job," but at the same time, the most rewarding.

This report is part of a series called "Facing Change," which examines the shifting demographics of the region. It comes from the New England News Collaborative, eight public media companies coming together to tell the story of a changing region, with support from the Corporation for Public Broadcasting. 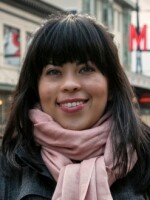